To make sure that i learned something well , i always want to write an article about that topic and it’ll be an opportunity to do more researchs about it. The last two days our team Fword participated in two CTFs (UMD CTF and WPICTF) and we were among the top 20 teams in both CTFs so GJ guys <3 anyway that’s why i decided to choose the best pwn tasks and write these detailed writeups about them to be a great practical introduction for people who want to dive into binary exploitation .

Note: This article assumes that you have basic knowledge of assembly and C language

1- Jump Not Found From UMD CTF : heap based overflow Note: You can Download the binary HERE, give it a try alone before reading the writeup that’s the best way to LEARN .

Before diving into the exploitation part , let’s talk about the heap section ,you have probably heard or used malloc or calloc functions in C , these functions are used to allocate memory on the heap,it is a region of your computer’s memory that is not managed automatically for you and used for dynamic memory allocation, unlike the stack which we dont have full control over it. The allocation algorithm in an abstract way is quite simple , we won’t dive into too much details , when for example we want to allocate a chunk of 16 bytes using malloc, it’s reserved in the heap and malloc returns the address of the beginning of the chunk where we can store the data we want.

Address of the beginning of chunk1 + Its size

This was in a really abstract way , you can do more research alone if you are interested , there is a lot of ressources in the internet :D

Let the fun begin now :D after downloading the binary let’s do some basic reverse engineering and read carefully its code , i used ghidra for that purpose , you can download it from its official website. Observing the main function , we can notice that it’s allocation two chunks , the first one its size is 0x42 (66 bytes) where our input will be stored and a second chunk which holds an array of function pointers , and based on our input (1 or 2 or 3) the program will call the appropriate function from the heap .

Of course as the most vigilant readers noticed , it’s using the dangerous function gets so we have the possibility to overflow stuffs :D Now here is our plan:

We will abuse the gets function and overwrite the jumpToHoth address with jumpToNaboo function which will prints the flag for us Before that we need to figure out the offset so let’s open the binary in gdb, set a breakpoint after gets and enter a simple pattern After that let’s visualize the interesting part of the heap

As you can see the “AAAAAAAABBBBBBBB” that we have entered followed by the array of function pointers , so the offset is obvious now which is 80, let’s begin writing our exploit :

The reason why i wrote *OFFSET=“1”+“A”79 is that if you have read the code carefully we will notice that the choice of the function that will be executed is loaded from the beginning of the chunk (which is logic) so i wanted to do it in one shot. As we know gets function stops when it encounters “\n” (0x0a) so entering the real address of the win function will terminate our input and thus we will never be able to write the address where we want :( Fortunately observing the assembly code of jumpToNaboo function we will see that we can start from the address that holds the part we want , which is printing the flag :

And Finally running the exploit will bring the flag for us :D

That was a quite simple example of exploiting a heap based overflow thus it was only solved by 25 teams from 321 teams . Let’s pass now to the second task which is a format string vulnerability. Note: You can Download the binary HERE and the libc HERE, give it a try alone before reading the writeup that’s the best way to LEARN .

As a quick introduction this is a brief explanation of the format string vulnerability :

format string is a type of software vulnerability. Originally thought harmless, format string exploits can be used to crash a program or to execute harmful code. The problem stems from the use of unchecked user input as the format string parameter in certain C functions that perform formatting, such as printf(). A malicious user may use the %s and %x format tokens, among others, to print data from the call stack or possibly other locations in memory. One may also write arbitrary data to arbitrary locations using the %n format token, which commands printf() and similar functions to write the number of bytes formatted to an address stored on the stack. Wikipedia If things are not clear for you you can search for more ressources about format string vulnerabilities . Let the hack begin now :D

In this task we are given the source code of the task , the binary and the libc . As you can see we can notice the format string vulnerability in the printf function and we have a leak of our buffer address in the stack and the system function.

Let’s do some static analysis , running the file and checksec commands , we get these results:

So we have a 32 bit binary with PIE and NX protections enabled , so we won’t be able to overwrite the GOT entry of a function since its address is randomized .

Let’s Get our hands dirty

Firstly , let’s create a pad function to make sure that the offset won’t change and let’s find the offset of our format string to know exactly where our buffer starts.

So our offset will be 7 , now let’s talk about our scenario , we will overwrite the saved eip with a one gadget from the libc ==> Spawn a shell \o/

We have all we need , an address from the stack and the system function address from libc, so let’s write our exploit and retrieve these address properly

Since we have the libc binary let’s calculate the libc base , and using gdb lets run the first part of our exploit and try to figure the offset between our buffer and the saved eip :

2- run gdb with the following command: So the offset is 0x71 ,finally let’s choose the one gadget , i have used the famous one_gadget tool esi is the GOT address of libc

now we have everything we need let’s finish our exploit :

Running our exploit will spawn the shell for us \o/

Thank you for reading the whole writeup :D I hope you liked it , you can check my github repo where i share my CTF writeups ! Arigatoo \o/ 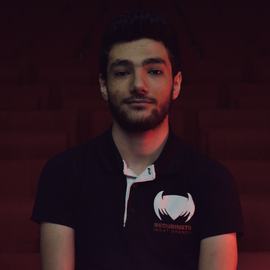